How do I get a job in a Dispensary?

Legal Marijuana Industry Has Jobs That Pay $50K to $90K

Society’s attitude towards recreational marijuana use is changing. Though still prohibited at the federal level, states including Colorado, Washington, Oregon, Alaska, as well as the District of Columbia have all rewritten their law books to declare recreational marijuana legal (however D.C.’s model continues to ban sales). The movement isn’t confined there though. In the 23 states where medicinal use is currently allowed – and even in the more conservative pockets of America that have yet to take the leap – grassroots campaigns are formulating to loosen restrictions further.

How this budding industry will end up shaking out remains to be seen. But as the industry evolves and finds its footing, jobs that simply ceased to exist (at least legally) yesterday, are suddenly opening up to provide viable, legal career paths for people looking to get involved with something new and emerging. In fact,according to the ArcView Group, a marijuana industry investment and research firm, legal marijuana was the fastest growing industry in the entire U.S. in 2014, and by 2019, all of the state-legal marijuana markets combined will make for a potential overall market worth almost $11 billion annually, a particularly astonishing claim considering how few states the business is even legal in. 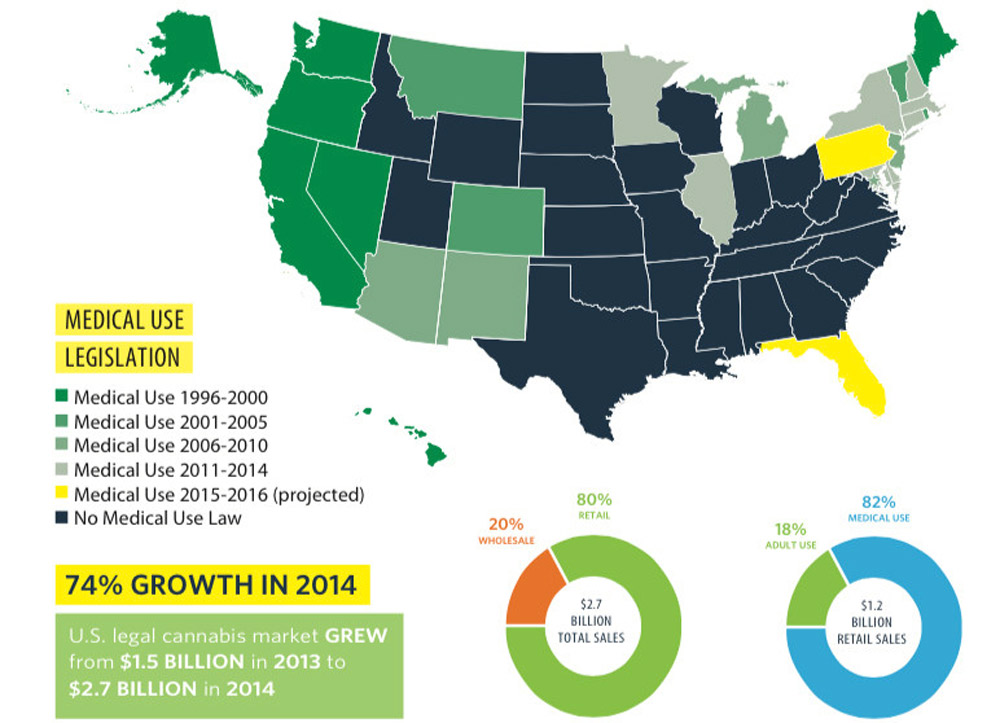 So, what are some of the jobs available in or on the fringes of the pot business?

According to a report from The Seattle Times, bud trimmers can make between $12 and $15 an hour cutting leaves away from the marijuana bud itself. It’s arduous, meticulous work, but a good way to get your foot in the door. Starting as a trimmer can also lead to other jobs relating to the cultivation of the plant as gardeners or concentrate makers, the Times adds, which carry salaries nearing six figures between $50,000 to $90,000.

Of course, it’s not just about growing and preparing the plant. You can work in marijuana retail, selling smokeable, edible and other innovative products to consumers. Or maybe you’re interested in real estate? Grow operations have certain physical space requirements and pinning down a facility can be difficult. You may not immediately think of real estate agents when you think about the legalization of marijuana, but accommodating space is of paramount importance to the industry. And that’s just to name a few.

As mentioned above, these are jobs that plainly didn’t exist not too long ago. Now that they do, well, there are both a lot of people doing them (the industry employs an estimated 10,000 people in Colorado, the nation’s first state to legalize marijuana) and a lot of people who want them (more than 1,200 people from across the country flocked to Colorado in 2014, ready to uproot their lives to live and work where the industry isn’t forbidden).

Soon enough, you may not even need to take a measure as drastic as moving across the country to get in the game, however. According to the Marijuana Policy Project, 17 states have introduced or filed bills to legalize and regulate the drug, 16 have proposed bills to decriminalize possession and 18 are looking to legalize medicinal use.

By David Eisenberg – Shared from Monster.com

The difference between edibles and smoking.

Marijuana math, how strong is my homemade edible?